A favourite saying amongst Tories, not least the late demented Margaret Thatcher, is that the Conservatives are the natural party of government in the UK. Simply in terms of incumbency that statement is just about correct: since the end of the Second World War, when regular TV schedules really began, the Tories have been in power for 47 years to Labour’s 30.

Has television played a part in maintaining the status quo? Although this post is not limiting itself to discussing the BBC, it’s useful to take a look at the key points of its charter:

Those with an interest in politics and the arts would probably say the corporation has very mixed success in achieving those aims, particularly with regard to impartiality and quality of broadcasts.

Certainly the first fifteen years of TV viewing following the war was deeply establishment-orientated, plummy and patronising. Classical music, earnest discussion programmes, the Reith Lectures, documentaries typified by the Hans and Lotte Hass undersea exploration films, Armand and Michaela Denis “On Safari”… middle- and high-brow tastes were well catered for; while for the plebeians there were dramas such as Emergency Ward Ten and Dixon of Dock Green, entertainment in the form of the Black and White Minstrel Show and the Billy Cotton Band Show, and comedies such as The Army Game and The Larkins… A diet of safe, reassuring content, during a time of peace and economic growth (the Korean War, Suez, the Kenyan liberation struggle and many other conflicts notwithstanding). We’d never had it so good. And what we watched on TV backed that message up relentlessly.

Then the 1960s happened. The Cuban Missile Crisis, CND, disclosures about the Cambridge Spy Ring, James Bond, the Profumo Affair, the Lady Chatterley’s Lover obscenity trial, Swinging London and Harold Wilson. The stuffy UK started to loosen up and consequently a small portion of television content became a little more daring; TV satire was born. That Was The Week That Was, TW3 and the Frost Report trod a virgin path, discussion programmes grew teeth, and politicians and the great and the good were shocked to find the customary culture of deference no longer applied when they were grilled by such sharp-fanged interviewers as Bernard Levin and David Frost.

That “golden age of satire” was short lived, and interviewers have since been reined in, although over the years certain TV journalists – such as Robin Day, Brian Walden, Jeremy Paxman and even Andrew Neil – have enjoyed a reputation for giving politicians a rough ride… particularly those on the left wing of the divide.

A small fringe of television output has striven to push the boundaries in every decade since the 1960s, notably the Dennis Potter dramas, Spitting Image, The Naked Civil Servant, Boys From The Black Stuff, Clocking Off, Auf Wiedersehen Pet… all part of a minority of TV programmes that commented on the human condition and questioned the status quo of the day.

Meanwhile, from Ken Tynan’s first utterance of “fuck” on TV (1965), attitudes to on-screen swearing have relaxed enormously, while similarly since Frank Finlay’s almost innocent gaspings in Casanova (1971), sex and nudity have become standard fare. What is in much more limited supply is not so much quirky TV, or cutting edge TV, but TV that not only states something about our lives in our increasingly dysfunctional society – the unhealthy status quo in most western nations – but raises a voice about our ovine acceptance of it.

Television at its best stimulates the grey matter, but the reality is that for the most part it has the opposite effect: it is a heavy sedative. And nowhere is that more true than in situation comedy, the shows we all grew up with and clustered around the box at the same time every week to devour. I thought I’d take a closer look at some of them.

I’ve taken the British Comedy Guide’s top 50 sitcoms as my source. Naturally it’s not exhaustive, but all of them have evidently been much loved by large portions of the UK’s population. They are:

Are You Being Served

As Time Goes By

Birds Of A Feather

It Ain’t Half Hot Mum

Last Of The Summer Wine

One Foot In The Grave

Only Fools And Horses

Some Mother Do ’Ave ’Em

The Fall And Rise Of Reginald Perrin

The League Of Gentlemen

The Vicar Of Dibley

Till Death Us Do Part

To The Manor Born

Therein we should be able to see a portrait of how we’ve lived during the past sixty or so years, and in a way we do. Many are distinctly middle class, about dentists and solicitors and bored stay at home mums, who have multiple cars and clutches of kids at uni, but just as many other are about working class families, dads who are plumbers, refuse collectors, out of work, mums who are shop assistants and caterers, kids at the comprehensive… But while many of their lives are portrayed with sympathy, their realities are almost invariably trivialised. 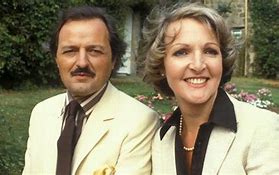 To the Manor Born

Maybe we shouldn’t expect too much from such programmes. To The Manor Born, a down on her luck aristo falling for a gauche new money magnate, of foreign extraction too! A set of ready-made tensions drawn out week after week, which could hardly have any sort of bearing on any real lives. The Last Of The Summer Wine, harmless old buffers up North who indulged in hilarious slapstick, episode after episode. The Vicar Of Dibley: horror of horrors, a female curate in a staid, sleepy, quintessentially English village, where scandals didn’t get any worse than unexpected changes to the skittles team. In all fairness, no one would really have tuned into any such programmes in the expectation of seeing any real life drama. They were the televisual equivalent of a mug of Ovaltine.

In others, however, could we have expected more? Sitcoms in which lives were supposedly slightly less cosy? In Bread, Only Fools and Horses and the Royle Family, stories often revolved around bucking the system. The crafty fiddlers, the grandiose little entrepreneur whose schemes never bore fruit, the work-shy paterfamilias who considered everyone else bone idle. Ricky Tomlinson, a real-life socialist, starred as the larger than life Jim Royle in the Royle Family, yet writers Craig Cash and Caroline Aherne created a lovingly-drawn working class family without speaking of many of the more worrying issues a family near to the breadline would inevitably have faced.

With only a few exceptions, disturbing reality was always kept at arm’s length in the sitcoms listed above. In The Fall And Rise Of Reginald Perrin writer David Nobbs created a superb satire involving a man crushed by a stultifying suburban existence and an absurd corporate world. Phoenix Nights lovingly recreated Northern Clubland, and Drop The Dead Donkey hilariously exposed the cynicism of the news media. But perhaps the most biting on the list is Till Death Us Do Part, Johnny Speight’s portrait of a working class East End family and lumpen, racialist, bigot-in-chief Alf Garnett, wonderfully played by Warren Mitchell. This was thought provoking comedy at its best and aroused a great deal of controversy – not the least because some brain-dead viewers actually regarded Garnett as some sort of role model. But such programmes form a very small minority of TV sitcom output.

Is it fair to single sitcoms out in a medium that as a whole appears to be increasingly hell-bent on reducing our brains to a pottage-like mush? Perhaps not, but their overall effect is to facilitate an uncritical acceptance of the nation’s status quo; whether that is by design or just a by-product of having timid, acquiescent programme commissioners I couldn’t possibly say. But one thing is sure: the vast majority of situation comedies act as the TV’s audience’s comfort blanket. The characters in them will have their minor trials and tribulations, but they exist in a thoroughly safe world where they’re largely insulated from the harsher realities of life, a make-believe land that the Tories would love us to believe we most of us share. I’m certainly reminded of Margaret Thatcher and her notion of the Conservatives as the natural party of government, and I can’t help thinking that TV helps foster that illusion.

I’ve left one of the best until last, the immortal but sadly mortal Tony Hancock, a small time Everyman with deeply Conservative instincts, forever brought back down to earth by his working class mate Sid James – wonderful character-led comedy written by Ray Galton and Alan Simpson. This is from The Blood Donor:

Hancock: I did not come here for a lecture on Communism young lady!

Nurse (June Whitfield): I happen to be a Conservative!