Now AI is Coming for the Middle-Class

In 1925 a Russian economist, called Nikolai Kondratiev published a book called Major Economic Waves in which he predicted the rise and fall of economic prosperity driven by new, era-defining technologies. The crux of it, according to Kondratiev, was that economic cycles last 40-60 years. His starting point, which studied the economic cycle for the 19th century, applying it further into the future, was ultimately to cost him his life.

The economist was killed by Stalin’s firing squad 82 years ago, largely because his theory demonstrated that capitalism went through stages of decline and renewal, rather than absolute collapse. Ironically, the next Kondatriev Wave might demonstrate most clearly capitalism not as the Ouroboros of eternal life, but as the self-consumption of its most craven desires.

According to Kondratiev’s waves — a term coined by economist Joseph Schumpter, posthumously in 1939, our current wave — that driven by the global information technology epoch, is due to, or has already expired. The theory, which posits that each epoch is marked in four stages — prosperity, recession, depression and improvement, – much like the cyclical seasons of summer, autumn, winter and spring – predicted the current era finished around the turn of the millennium.

If Kondratiev is right, the next epoch should’ve started at some point between the turn of the century, and now, 2020. And now, looks like an exceptional fertile time for huge changes to occur. Obviously, global pandemic or other such events do not figure in economic theory but they have through the course of history brought forward or altered human ways of being, living and working.

Many economists would argue that Kondratiev’s waves are not a reliable measure, either in when these waves start or end, and there are also question marks over the data collection of grain yields that provided his theory of economic seasons within each industrial evolution. There’s also the small matter of natural disasters – and pandemics – which clearly affect economies. Yet, Kondratiev’s ideas still have a considerable number of proponents, even if perhaps it might be another form of prediction or pattern recognition.

Blogger Charles Hugh Smith, writing in 2011, claimed that 2020 would be at the intersection of four long-term cycles: the passing of the war generation – those born in the war, the longer-term cycle of price inflation and wage stagnation, the credit expansion and contraction cycle, and the downward movement of Peak Oil depletion. 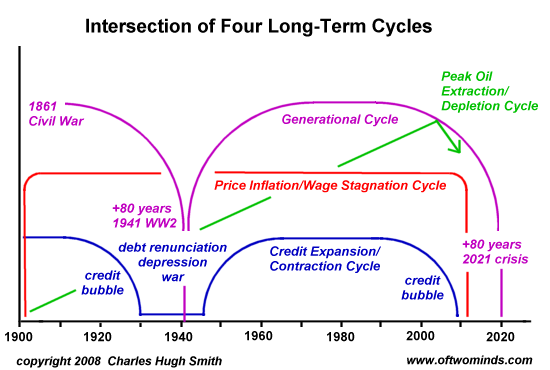 While the wage stagnation and credit bubble predictions are still a decade out, it makes for sober reading what comes next. Despite the transition to a digital economy over the past 20 years the biggest driver of industrialized economies, has been growing levels of domestic, commercial and national debt, which suggest a global economy out of ideas and out of steam. Quantitative easing and low interest rates have kept the engine ticking over but the petrol tank is empty.

Once the cold winds of the Kondratiev winter begin to blow and the typical overclass member sees the permanent collapse of his 401K, elimination of his bonus, and his stock options expiring worthless, he will learn he is not the same as the rich.”

“During the Kondratiev fall when conditions favour asset appreciation and the secondary wave represents enormous opportunity to the educated and savvy, the non-rich members of the overclass can pretend they are the same as the truly rich, and that their interests coincide. […]

Once the cold winds of the Kondratiev winter begin to blow and the typical overclass member sees the permanent collapse of his 401K, elimination of his bonus, and his stock options expiring worthless, he will learn he is not the same as the rich.

While the current K wave – if it’s to be believed – brought industrial decline to the West and the age of information in all its forms: the office cubicle, teleconferencing, industrial-scale telephony, hotdesking, the bullshit job, the death-rattle of unions and the atomisation of the labour movement. It is up for debate whether, in light of covid-19, the next wave will be more an industrial de-escalation rather than a revolution. The working class have been feeling the effects for years, and will feel it even harder. AI is coming for the middle-class.

Companies and corporate entities that seek to adjust their losses, during financial crises through staff lay-offs and redundancies, rarely recruit to the same levels again even if they survive and flourish in later times. New technology usually allows larger companies to replace gaps in their staffing, and those that can’t will go to the wall.
AI and automation research and development will likely be hastened by the frustrations and furloughs of a global lockdown for the wealthiest companies. For the multitude of SME’s that keep the biggest Western economies afloat, this could be a Darwinian moment.
Certainly, it will give context to technology that has long been in creation. A global pandemic of course, brings about both the necessity to down-scale, but also to bring forward projects that might have been longer-term investments – particularly if they are ‘ready to go’, labour-saving and justify the productivity output of taking x labour from the balance sheet.

The working class have been feeling the effects for years, and will feel it even harder. AI is coming for the middle-class.

This obviously won’t spell the end of labour and working. But we are beginning to see the shrinking of human labour, which in historical contexts looks obvious. If Kondratiev’s general theory is correct, the start of the last (or current) K wave would’ve been around 1970 – roughly when expanding Western corporations began cost-cutting and eventually moving industrial work to the cheaper labour markets of Asia, and is generally considered the decade when ‘globalization’ as we know it began.

The erosion of the industrial base in industrialised economies soon followed – and so it would be logical that the next industrial wave should continue the trend of de-labourisation. Robots and AI technologies have been steadily been worming their way into our daily life for years – whether it’s supermarket checkouts, streaming services, smart cars or Amazon’s Alexa. They’re here to help us, but….for how long?

What now looms – is the industrial expansion of automation and the disappearance of significant chunks of low-skilled work, and indeed tasks or jobs performed by the more skilled. Planned obsolescence might be something we have become wearily accustomed to in the life-cycle of our tech, but soon it could be a feature of the human workforce.

Examples of algorithms making crucial decisions in recruitment and HR; replacing face-to-face diagnoses for those without medical insurance in the US, the increasing presence of Al in legal work to manage caseloads, or even how AI can manage your investment portfolio (if you’re lucky enough to have one).

Examples of AI and robotics abound, and yes they’re coming for your job, despite all the talk of ‘Cobots’ helping to share the workload. Despite this, in more recent (October 2019), and socially intimate times, more than two-thirds of Americans believed that robot technology would aid their work rather than making them obsolete. the bottom line remains cost efficiency and ‘streamlining’ – or any other euphemism you can conjure, for what equates to staff cuts. While we apprehensively wince at the thought of a nightmarish future with driverless cars – and all of the moral questions that could come from it – there is already the tech to do so, and to deliver your goods to your front door, in the process. All that is stopping those that can afford it is legislation – and public acceptance. Both will come.

Could this clumsy robot be key to fully automated deliveries? pic.twitter.com/TThXCO1OOZ

…the slow removal of the labour market, and the economic crisis that that will prolong or eventually bring, could be a more immediate crisis for humanity than the environmental problems that capitalism and consumerism have been slowly storing up.

What the four day working week and UBI will not provide is tax revenue, which might not make a significant dent in tax revenues for the many workers in retail or catering, but when automation and AI begin to make a significant impact on the professional services and comfortably middle class – that provides more telling issues for the powerful to deal with. There’s always robots when it all goes wrong.

Of course, governments will need to increase tax receipts, to cover the full costs of the pandemic in a post-pandemic time; and that will be significantly harder coming out of a potential economic depression and with the looming threat of a whole host of vanishing jobs. A forward-thinking response to these crises, might be to implement an asset or land-value tax rather than an income-based one, in order to keep the working-class afloat, but would punish middle-class the most; an approach politically, that appears to make sense in polite conversation but not, at the critical moment, in the polling booth.

Certainly the imperatives are all present for the next technological push – the next K wave: the necessity to power our societies in clean and efficient energies and avoid ecological disaster; reconfiguring economies based, not on output and growth but by other measures that demonstrate a universal prosperity; the acceptance that infinite supply and infinite demand on finite resources is not a possible outcome in any universe. For this to happen of course sensible public discourse should follow, but we are farther than ever from this through the deepening networks of misinformation and alarming societal fragmentation that have come about through the immediacy of digital publishing, and the flowering of troll farms and bots to skewer reality once more. AI, once more.

But the way to extend the infinite supply – demand delusion is of course, to invest in the removal of labour costs to continue it, but for how long? The stock markets will sing – just look how they’ve rolled over and had their tummies tickled mere weeks into an economic crash – but the slow removal of the labour market, and the economic crisis that that will prolong or eventually bring, could be a more immediate crisis for humanity than the environmental problems that capitalism and consumerism have been slowly storing up.

”Michael A. Alexander, The Kondratiev Cycle: A Generational Interpretation